The earliest theater space in Georgia dates back to the third century BC and can be found at Uplistsikhe. Despite a lack of theatrical texts, performances certainly occurred in Georgia and developed into a unique festive theatrical art with taste for singing, dancing and reenactments of epics. In the Middle Ages, theatrical festivals like berikaoba often became a means of protest against conquerors or feudal oppression and helped preserve oral traditions. Satires and folk performances with masks were common in the period.

The history of modern theater starts in the 19th century. Giorgi Eristavi emerged as the leading dramatist of this age and, in January 1850, he established his own theater where several Georgian plays were produced. In 1879, another company was established in Tbilisi with the help of such luminaries as Ilia Chavchavadze and Akaki Tsereteli. This theatrical center, soon became the famous Rustaveli Theater, became a cultural center of Georgia, where ideas of liberty, humanism and reforms were discussed. The theater quickly gained a following and began producing performances that combined modernity with traditional folk style. Productions varied from Georgian satires and comedies to European and Russian tragedies and plays. The early 20th century was one of the most important periods in the development of the Georgian theater. The theater prospered through the work of Valerian Shalikashvili (1874-1919), Alexander Tsutsunava (1881-1955), Mikhael Koreli (1876-1949), Kote Andronikashvili (1887-1954), Akaki Pagava (1887-1962) and others.

The most important of these artists was the ingenious Kote Marjanishvili, under whose direction the Georgian theater rose to a new level. Marjanishvili himself enjoyed close relations with the finest stage directors of this period, Stanislavsky and Nemirovich-Danchenko, and merged the elements of Russian and European theatrical art with Georgian romantic and heroic traits. In 1928, Marjanishvili established a new company in Kutaisi, which was later renamed after him, and produced his first play Ernest Toler’s Popola, we are living. He was supported in his work by such prominent artists as Shalva Dadiani (1894-1959), Polikarpe Kakabadze (1895-1972) and others. Among Marjanishvili’s many stage productions were The End of the “Nadezhda” (1909), Dostoevsky’s Brothers Karamazov (1910), Ibsen’s Per Gynt (1912), Offenbach’s Die Schöne Helena (1913), Mozart’s Entführung aus dem Serail (1923), Eristavi’s Partition (1823), Arakishvili’s The Tale of Shota Rustaveli (1923), Shakespeare’s Hamlet (1925), Kutateli’s Midnight Past (1929), Rossini’s William Tell (1931), etc. Following in Marjanishvili’s footsteps was Alexander (Sandro) Akhmeteli, who was instrumental in the further development of the Georgian theater. He sought to create a heroic and monumental stage production that had a unique rhythmical structure and engaging characterizations. Akhmeteli produced such successful theater and opera works as Glebov’s Zagmuk (1926), Shanshiashvili’s Anzor (1928), Lavrenyov’s Break-up (1928) Kirshon’s City of the Winds (1929), Dadiani’s Tetnuldi (1931), Arakishvili’s The tale of Shota Rustaveli, etc.

The establishment of Bolshevik rule in Georgia influenced the development of the Georgian theater. In the 1930s, theatrical productions featured characters of workers, peasants and Soviet revolutionaries and depicted the life on a collective farm or a worker’s toils in a factory. In the 1940s, theater performance shifted its focus to the Georgian past in an attempt to appeal to nationalism during World War II. In the 1950s, plays based on works by European authors were staged, including Shakespeare’s Othello, Antony and Cleopatra, Richard II, Sophocle’s Oedipus Rex, plays by Lope de Vega, Carlo Goldoni, Pierre Augustin Beaumarchais, Bernard Shaw, Alexander Pushkin, Mikhail Lermontov, Nikolay Gogol, Fyodor Dostoevsky and others. The period produced directors such as Vakhtang Tabliashvili (1914-?) and Vaso Kushitashvili (1894-1962) and the actors Akaki Khorava (1895-1972), Sergo Zakariadze (1909-1971), Erosi Manjgaladze (1925-1982) and Akaki Vasadze (1899-1978), designers Ioseb Charlemagne (1880-1957), Irakli Gamrekeli (1884-1943), Vladimir Sidamon-Eristavi (1889-1943), David Kakabadze (1889-1954), Elene Akhvlediani (1901-1975), Tamar Abakelia (1905-1953), Peter Otskhali (1907-1937) and the great Suliko Virsaladze (1909-1988).

In the 1960s-1980s, Georgian theater gradually turned away from realism and experimented with new genres and styles. The period is noteworthy for the works of Giga Lordkipanidze (1928- ), Robert Sturua (1938- ) and others. Sturua emerged as a master of the epic form and gained worldwide fame for his direction of Shakespeare’s plays Richard III (1979) and King Lear (1987) and the critically acclaimed direction of The Caucasian Chalk Circle (1975). Playwrights N. Dumbadze, G. Abashidze, T. Chiladze, A. Chkhaidze, Sh. Shamandze, Lali Roseba and others authored many successful plays. During the period of civil strife in Georgia in the 1990s, the Rustaveli Theatre continued to operate under the artistic direction of Robert Sturua, producing new performances including such experimental ones as ABC, Life is a Dream, Macbeth, Lamara, Irine’s Happiness, Women-Snake and others.

The two most important theaters in Georgia are the Rustaveli and the Marjanishvili Theaters. Another company, the Tumanishvili Studio Theater of Film Actors, was established in 1977 and serves as a stepping ground for less known artists or recent theatrical graduates. The Royal District Theater operates since 1992. The Opera and Ballet Theater functions in Tbilisi since 1851 and produced performances of Z. Paliashvili’s Abesalom and Eteri and Daisi, Taktakishvili’s Mindia, Dolidze’s Keto and Kote, Tchaikovsky’s Queen of Spades, Swan Lake and Nutcracker, Bizet’s Carmen, Mascagni’s Cavalleria rusticana, Puccini’s Tosca and La Boheme, Verdi’s La Traviata and Rigoletto, Mozart’s Don Giovanni and many others The Griboedov Russian Drama Theater, founded in 1845, and the Armenian Drama Theater, established in 1863, are other major centers of theatrical art in Tbilisi. The smaller Rustavi Theater exists in Rustavi, the Meskhishvili Theater in Kutaisi, the Dadiani Theater in Batumi and the Youth Drama Theater in Akhaltsikhe. The Abkhazian and the Sukhumi Georgian Theaters operated in Sukhumi prior to the conflict in Abkhazia and several Georgian and Ossetian theaters were open in Tskhinvali. In 1986, the Theater Studio was established on the Rustaveli Theater’s Small Stage. Tbilisi is also the home of the Russian-Georgian Youth Theater and the Russian Youth Theater. In 1982, the State Pantomime Theater was established in Tbilisi and developed under the direction of Amiran Shalikashvili and Kira Mebuke. The Marionette Theater of Rezo Gabriadze has been successfully performing for decades now and gained worldwide fame for its works.

Currently, there are forty theaters in Georgia, drawing some 266,000 spectators annually. In addition to classical theaters, Georgia is also famous for its dance theaters. In 1886, a Georgian Ballet Theater was established under the direction of Maria Perini and later Mikhail Mordkin. But it was Vakhtang Chabukiani who transformed the classical ballet by introducing Georgian traits and characteristics. He became the ballet company’s leading dancer and brought a unique spirit and energy to his dances. Chabukiani worked as the choreographer and artistic director of the Paliashvili Theatre of Opera and Ballet in 1941-1973 and ballet master and director of the Tbilisi Choreographic Academy in 1950-73. Under his direction, the ballet developed a new archetype of a male dancer with strong legs, general athleticism and uninhibited energy. Among many productions of this period were Heart of the Mountains (1941), Sinatle (1947), Laurencia (1948), Gorda (1950), For Peace (1953), Othello (1957), Demon (1961), Bolero (1971), Hamlet (1971), Apasionata (1980) and others. Simultaneously, Iliko Sukhishvili and Nina Ramishvili founded the Georgian State Dance Company in 1954 and played a crucial role in refining Georgian folk dances. The Sukhishvili Dance Company toured worldwide with great success and remains the finest dance company in Georgia.

History of the Georgian Cinema

Prehistoric Georgia and Rise of Societies and States 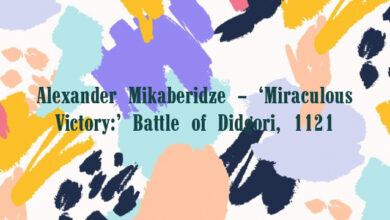 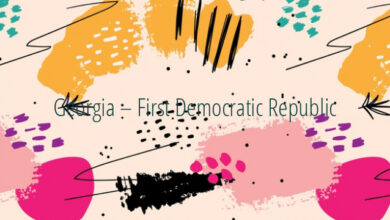