What will the good backgammon player do, if he does not throw  the six in time

I am just what is called a lover of the chase. I have a strange liking for sitting at the foot of a tree in a shady, voiceless forest waiting with bated breath for the sighted quarry. There is an untiring  pleasure  in  this  enviable  occupation.  I  agree  with  you  that  hunting  is  a  sin:  every  creature is the work of God’s hands, each has an equal desire to live on this: wide earth, but what is  to  be  done?…  Holy  Writ  assures  us,  not  falsely,  that  it  was  man  who  shed  the  first  innocent  blood of man on earth. Man is a shedder of blood, and I am a man. Many a time have I seen a deer  frightened  by  the  hounds,  many  a  time  have  I  seen  it  and  many  a  time  has  my  mind  been  captivated  by  its  free  beauty.  When  it  has  set  its  branching  horns  along  its  back  it  runs  swift,  beautiful and proud, while behind it barks the trained hound. The poor beast outruns the dog and falls into the clutches of man, who in these circumstances is more merciless and less to be trusted than  the  dog.  From  afar  the  keen-eared  sportsman  hears  the  deer’s  footfall.  He  hears,  and  his  bloodthirsty  heart  beats  and  beats  with  sheer  impatience.  Now  it  comes  within  gun  range,  between  the  leaves  and  bushes  is  seen  its  sad,  melancholy  head.  The  dog  draws  near.  The  deer  pauses,  then  darts  round  like  an  arrow  into  the  bushes.  Thou  thinkest  that  since  thou  hast  changed  thy  way  thy  beloved  wood  will  give  thee  full  freedom  from  danger,  but  no,  J  whistle.  Then  you  should  see  with  what  sadness  it  stands,  with  what  wondrous  beauty  it  draws  up  its  neck, how in terror and despair it begins to turn its melancholy eyes, to prick up its ears and to sniff  with  widened  nostrils!  It  is  so  pretty  and  so  tender  and  yet  in  its  timidity  there  is  such  an  attractive  pride  that  you  would  think  that  it  had  gathered  all  the  grace  granted  it  by  nature  in  order  by  its  worth  and  beauty  to  soften  the  heart  of  the  hidden  foe!  But  man  is  not  so  tender-hearted as to be deterred by this, when it smelt the smell of man the deer resolved to flee, but the gun  thundered  forth  and  the  deer,  hitherto  living,  free  and  bold  was  stretched  on  that  grass  in  whose lap he had first opened his eyes to greet the world and where he now finally closed them in an eternal farewell. It had been its cradle and at the end it was its grave. You should see how resignedly and quietly the proud free beast died. But its tearful eyes always seem to be asking me this question: My slayer, God’s world is large and wide — Why dost thou grudge me, innocent and peaceful, a span’s length on God’s boundless earth? These words sadden the heart until, the earth  has  dried  up  the  blood  spilt,  and  when  it  begins  to  dry.  then  I  call  to  mind  that  even  we  lords of creatures, the crowns: of things created, we who are made in the image of God, do not suffer each other to have room, — when I remembered that on every foot of ground trodden by man, some of man’s blood had dried, then I consoled myself and, justified, I said to myself: “this at  least  is  well,  my  friend,  that  thou  diest  there  where  thou  wast  born.  We  men  sometimes  are  deprived even of that happiness”.

About  fifteen  versts  down  from  our  village  there  are  some  good  hunting  grounds.  But  why  there?  Everywhere  in  our  blest  land,  where  —  as  the  peasants  say  —  “Christ  God  has  shaken out from his generous bosom”, everywhere are good places. Whatever you want is there, beginning with the graceful deer and finishing with the gentlemanly wild boar or the wise bear. Not  to  speak  of  birds.  But  down  from  our  village  were  my  favourite,  hunting  grounds.  Well  I  knew  their  disposition  and  I  had  my  game  marked  down  and  even  seen.  I  used  to  go  away  for  two  or  three  days;  when  night  drew  nigh  I  turned  into  a  little  village  where  I  had  a  worthy  peasant gossip. I would spend the night there and in the morning when the grey dawn appeared I went  down  to  hunt.  I  had  not  been  there  for  two  months,  when  at  last  I  longed  to  go  out.  One  fine,  summer  morning  I  said  my  prayers,  took  my  double-barrelled  gun,  called  my  hound  and went out. At the entrance to my gossip’s village where the double hedge began, on the edge of a     cart road stood an old straw shed leaning against a byre. The entrance down into the stable was vaulted like the carpeted covering on a bullock cart. Round about this shed there was no trace of man.  It  had  been,  I  think,  abandoned  to  its  fate  and  forgotten,  like  its  owner  at  his  removal  or  death. Of course, I had frequently gone up and down past this shed, for it stood on the edge of the road, but for as many times as I had passed to and fro I had not once seen a living«creature here.

Perhaps  at  times  a  skinny  backed  peasant’s  horse  which  could  go  no  farther  from  feebleness was enticed to the neighbourhood of the shed by the grass dried up with drought. But one  day  as  I  was  passing,  to  my  wonder,  I  saw  a  man  lying  at  the  door  of  the  stable.  That  was  nothing.  In  the  morning  when  I  went  past  I  looked  and  saw  the  man  still  lying  there.  In  the  evening, before twilight had quite yielded to darkness, I came back again I found the man there. It surprized me all the more as there was none but he. I resolved that I would certainly ask my godsire  who  he  was  that  evening.  My  godsire  answered  my  question  thus:  What  can  I  tell  you,  my son? No one here knows who he is. He is some needy peasant having no master; he is sick and came and settled there about a month and a half ago.

—Is he quite alone?

—How do I know? He has not any comforter there at any rate.’

—Then who provides for him?

—The world. On that road movement never ceases. There are always passers-by: it may be a man of God drops him a piece or two of bread. He asks for nothing more than that.

— He does not belong to these parts?

— What do you ask? If he belonged here how could he have so displeased God that his own folk would not have given to him. No, he is not of these parts. Have you spoken to the. man?

— Did he say nothing about himself?

— No. But the unhappy man was evidently educated.

— Perhaps you did not ask him about himself?

— How not ask him? Once he said to me: “I, says he, am a forgotten man, why dost thou want to know who I am? Look at me, my brother, and know me”, — says he. He spoke no more of himself and I asked no more after that. I think he is hiding himself.

This made me wonder. By nature I am a lover of knowledge and now imagine how these fragmantary words of my godsire moved my heart to learn the man’s story. What could he have to conceal? I thought to myself. I resolved that whatever might betide me, I would ask the poor man himself who he was.

One  day,  worn  out  with  wandering  in  vain,  and  empty-handed,  I  was  returning  to  my  gossip’s. The sun was still high. It was the time when the cattle are let out of the byre. I saw the wretched man still lying in the same place. My heart could endure no more. I said: whatever may be, I will go and perhaps I shall persuade him to tell me something. I am a little tired too and it is a good way to my godsire’s house. If it does no more good it will let the rheumatism out of my wearied knees, I went up and wished him “Victory” (*1)

God  grant  thee  length  of  days-he  replied  with  a  weak  voice,  and  he  came  forward  respectfully  when he saw I was of the princely class.

*  *  *
“Alas! O world, (Fate) what ails thee?
Why dost thou whirl us round?
What (ill) habit afflicts thee?
All who trust in the weep ceaselessly like me.
Whence and whither earnest thou?
Where and whence uprootest thou?
But God abandons not the man forsaken by thee
(Rustaveli: “The Man in the Panther’s Skin”).

— He speaks truth who said that may thy troubles be upon me! If the world has turned to face away from me and not given me shelter,   still God’s lap is broad!…

God bless the speech of that man whose words console even to the door of the grave such inconsolable ones! Peace be upon thy mighty soul, immortal Rustaveli.

— What shall I do? said I in my heart. This man cannot have been what he now is. My curiosity was unrestrained now that the man himself had prolonged the conversation with me and given  me  hope  of  learning  something  of  him.  I  wished  to  question  him,  but  did  not  dare:  I  recognized that a long familiar breath had suddenly inspired him with great melancholy. First I preferred that the cloud of melancholy should dissipate, then I would question him as to who he was. At last he turned towards me and for a long time fixed his black eyes upon me.

Ilia Chavchavadze - Is That a Man?! 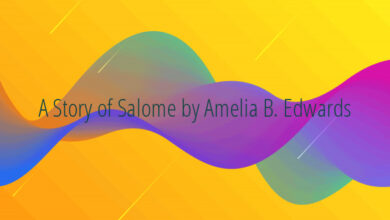 A Story of Salome by Amelia B. Edwards 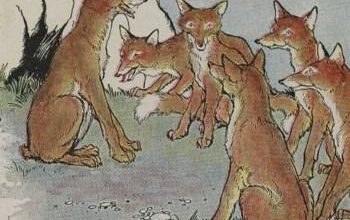 Aesop The Fox Without A Tail 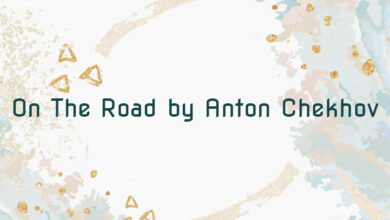 On The Road by Anton Chekhov 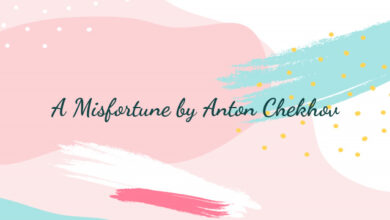 A Misfortune by Anton Chekhov