Coleridge’s best-known poems are The Rime of the Ancient Mariner (1798) and Kubla Khan: or A Vision in a Dream, which was composed one night in 1797, after waking from an opium-stupor. He describes Xanadu, the summer palace of the Mongol ruler and Emperor of China, Kublai Khan, or Shizu, founder of the Yuan Dynasty. He published it in 1816, after encouragement from his friend, Lord Byron. It took critics years before it was openly admired. Read about the history of Kublai Khan, grandson of Genghis Khan.
An illustration for the story Kubla Khan: or A Vision in a Dream by the author Samuel Taylor Coleridge
In Xanadu did Kubla Khan
A stately pleasure-dome decree:
Where Alph, the sacred river, ran
Through caverns measureless to man
Down to a sunless sea.
So twice five miles of fertile ground
With walls and towers were girdled round:
And there were gardens bright with sinuous rills,
Where blossomed many an incense-bearing tree;
And here were forests ancient as the hills,
Enfolding sunny spots of greenery.
Kublai Khan, Emperor of China, Yuan Dynasty
But oh! that deep romantic chasm which slanted
Down the green hill athwart a cedarn cover!
A savage place! as holy and enchanted
As e’er beneath a waning moon was haunted
By woman wailing for her demon-lover![297:3][297:4]And from this chasm, with ceaseless turmoil seething,
As if this earth in fast thick pants were breathing,
A mighty fountain momently was forced:
Amid whose swift half-intermitted burst
Huge fragments vaulted like rebounding hail,
Or chaffy grain beneath the thresher’s flail:
And ‘mid these dancing rocks at once and ever
It flung up momently the sacred river.
Five miles meandering with a mazy motion [298]Through wood and dale the sacred river ran,
Then reached the caverns measureless to man,
And sank in tumult to a lifeless ocean:
And ‘mid this tumult Kubla heard from far
Ancestral voices prophesying war!
The shadow of the dome of pleasure
Floated midway on the waves;
Where was heard the mingled measure
From the fountain and the caves.
It was a miracle of rare device,
A sunny pleasure-dome with caves of ice![298:1]

A damsel with a dulcimer
In a vision once I saw:
It was an Abyssinian maid,
And on her dulcimer she played,
Singing of Mount Abora.
Could I revive within me
Her symphony and song,
To such a deep delight ‘twould win me,
That with music loud and long,
I would build that dome in air,
That sunny dome! those caves of ice![298:2]And all who heard should see them there,
And all should cry, Beware! Beware!
His flashing eyes, his floating hair!
Weave a circle round him thrice,
And close your eyes with holy dread,
For he on honey-dew hath fed,
And drunk the milk of Paradise.
Coleridge’s rough draft of Kubla Khan

Kubla Khan: or A Vision in a Dream was featured as The Short Story of the Day on Mon, Sep 23, 2019
This poem is featured in our selection of 100 Great Poems.

First published together with Christabel and The Pains of Sleep, 1816: included in 1828, 1829, and 1834.[295:2] There can be little doubt that Coleridge should have written ‘the summer of 1798’. In an unpublished MS. note dated November 3, 1810, he connects the retirement between ‘Linton and Porlock’ and a recourse to opium with his quarrel with Charles Lloyd, and consequent distress of mind. That quarrel was at its height in May 1798. He alludes to distress of mind arising from ‘calumny and ingratitude from men who have been fostered in the bosom of my confidence’ in a letter to J. P. Estlin, dated May 14, 1798; and, in a letter to Charles Lamb, dated [Spring] 1798, he enlarges on his quarrel with Lloyd and quotes from Lloyd’s novel of Edmund Oliver which was published in 1798. See Letters of Samuel Taylor Coleridge, 1895, i. 245, note 1. I discovered and read for the first time the unpublished note of November 3, 1810, whilst the edition of 1893 was in the press, and in a footnote to p. xlii of his Introduction the editor, J. D. Campbell, explains that it is too late to alter the position and date of Kubla Khan, but accepts the later date (May, 1798) on the evidence of the MS. note. [296:1] ‘In Xamdu did Cublai Can build a stately Palace, encompassing sixteene miles of plaine ground with a wall, wherein are fertile Meddowes, pleasant Springs, delightfull Streames, and all sorts of beasts of chase and game, and in the middest thereof a sumptuous house of pleasure.’—Purchas his Pilgrimage: Lond. fol. 1626, Bk. IV, chap. xiii, p. 418.
[297:1] The quotation is from Theocritus, i. 145:—ἐς ὕστερον ἅδιον ᾀσῶ.

‘I’ll mark thy “sunny domes” and view Thy “caves of ice”, and “fields of dew”.’ It is possible that she had seen a MS. copy of Kubla Khan containing these variants from the text.

Facebook Notice for EU! You need to login to view and post FB Comments!
Tags
Kubla Khan: or A Vision in a Dream Samuel Taylor Coleridge 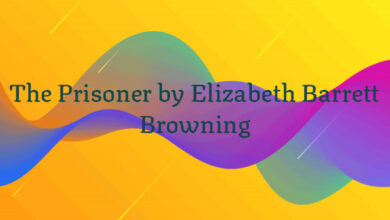 The Poet And The Bird by Elizabeth Barrett Browning 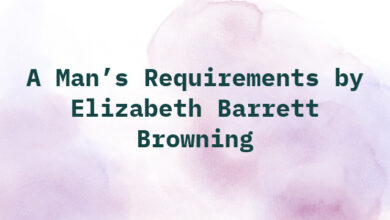 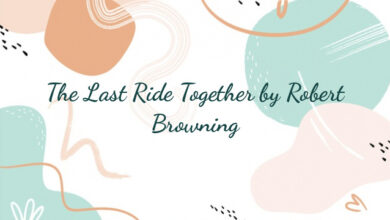 The Last Ride Together by Robert Browning 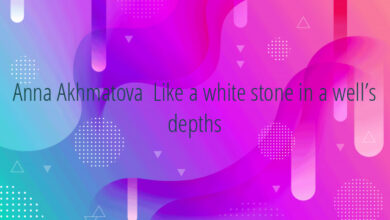 Anna Akhmatova Like a white stone in a well’s depths