In the late seventh century, a new political and military power appeared on the international scene. United by a powerful religious message, Arab tribes proved to be a force to be reckoned with as they overrun the eastern provinces of the Byzantine Empire and Sasanid Persia and carved out their own domain. The first Arab raiding parties appeared in Georgia in 642-643 but, following the conquest of Armenia in 652, Arabs arrived in force. In 654, the Arab commander Habib ibn-Maslam negotiated a treaty of protection (datsvis sigeli) with Erismtavari Stefanoz II, who agreed to pay a jizya or protection tax levied on non-Muslim nations. Two years later, Iberian authorities took advantage of the internal dissension in the Caliphate to cease paying tribute. However, Arabs soon returned with a vengeance and began a systematic conquest of eastern Georgia in the 680s. In 685, the Byzantine Empire and the Caliphate agreed to share the tribute from Armenia and Kartli but the local population rose in rebellion in 686 and Erismtavari Nerseh of Kartli defeated the Arab forces in Armenia. Yet, in 697, the ruler of Egrisi, Sergi Barnukis-dze invited Arabs to western Georgia to help him fight the Byzantine forces; Arabs occupied the capital city of Tsikhegoji and other key fortresses but failed to firmly establish themselves in the region and soon withdrew.

Unlike western Georgia, Kartli remained under Arab domination and, starting in 704-705, Arabic coins were minted in Tbilisi. The Arabs treated Armenia and Georgia as a single frontier province and subjected it to heavy tributes. Discontented with new taxes and alien authorities, the local population rose in rebellions and the struggle against the Arabs soon assumed a popular character. In 681-682, Adarnase II of Kartli and Prince Grigor Mamikonian of Armenia held off the Arabs, but eventually perished in this struggle. In 689, the Byzantine Emperor Justinian II forced the Arabs to cede Georgia and recognized Guaram II (684-693) as curopalates of Kartli. In 693, the Arabs recovered their possessions in Kartli and Armenia and the vicious circle of fighting began anew.

In the early eighth century, Iberians and Armenians organized several unsuccessful revolts against the Arabs. In 735, the Arab commander Marwan ibn-Muhammad led another punitive expedition into Kartli, sacking Tbilisi and capturing the fortresses of Tsikhegoji and Sukhumi in western Georgia. He left such devastation and desolation in his wake that his nickname Murwan Qru (Murwan the Deaf, i.e. deaf to pleas) still survives in popular tradition. A new Arab emirate led by the amir of Tbilisi was established in Kartli. In addition to jizya and kharaj (tax on land) taxes, Georgians were forced to provide troops for the Arab armies and a labor force for various projects. Conversion to Islam was widely encouraged and Christianity persecuted, producing many Christian martyrs, including Abo Tbileli, Princes David and Constantine of Argveti. As the Arab dominance intensified, the Georgian and Armenian forces often united under the banner of Christianity. The amirs of Tbilisi eventually became powerful enough to defy the Abbasid caliphs for decades. The caliphs finally tried to restore their authority in Georgia and, in 853, a large Arab army led by Bogha al-Kabir (Bugha Turki) ravaged Kartli and sacked Tbilisi on 5 August. However, in 914, another Arab expedition under command of Abu al-Kasim failed in subduing Kartli and proved to be the last such attempt on the part of the Caliphate. With the Abbasid Caliphate gradually declining, several semi-independent principalities emerged on the territory of Georgia. The Kingdom of Abkhazia covered most of western Georgia, the Bishopric of Kakheti and Principality of Hereti rose in the east and Tao Klarjeti dominion in the southwest.

Of the emerging Georgian principalities, Tao (known as Tao-Klarjeti in Georgian sources) proved to be the most important by far. Ruled by the Bagration (Bagrationi) princely family, Tao gradually expanded its sphere of influence. In the second half of the 10th century, during the rule of one of its greatest princes, David Curopalates, Tao turned into a large and powerful principality, whose borders reached Lake Van. The growth and consolidation of this realm contributed to closer cultural and economic ties with other kingdoms and principalities. The might of the new Georgian principality was clearly demonstrated in 979, when the Byzantine Emperor Basil, facing a large rebellion, appealed for help to David Curopalates. A Georgian expeditionary corps under Tornike Eristavi defeated the insurgents and restored authority to the emperor. Throughout his reign, David Curopalates pursued his great design of the political unification of Georgia. Supported by Ioane Marushisdze, a powerful eristavi of Kartli, he succeeded in having his grandson Bagrat placed on the throne of Kartli in 975 and of Abkhazia in 978. Following David’s death in 1001, King Bagrat III inherited Tao and later annexed Kakheti and Hereti in 1008-1010, thereby uniting eastern and western Georgia into a single state with a capital in Kutaisi. The united kingdom of Georgia was born.

The rise of the Georgian kingdom worried the Byzantine Empire. In the 1000s, its Emperor Basil II, despite Georgian military aid in 979, occupied Tao and the Georgian-Byzantine disputes over this region soon escalated into a war. King Giorgi I (1014-1027) initially defeated the imperial army but, once the Byzantine conquest of Bulgaria was completed in 1018, Emperor Basil II diverted his resources against Georgia. In 1021-1022, his forces defeated King Giorgi I and his Armenian allies and occupied the provinces of Tao, Artaan and Javakheti. The new Georgian King Bagrat IV (1027-1072) continued the war but faced powerful opposition of feudal lords who refused to recognize his suzerainty and joined the Byzantine army in 1028; the lords of Kakheti and Hereti were particularly defiant and broke away from the Georgian kingdom. The Georgian-Byzantine war eventually ended in 1029 after the Georgian Queen Mariam visited Constantinople and negotiated a peace treaty with Emperor Romanus III. Bagrat IV then turned to internal problems subduing rebellious feudal lords, including the mighty Eristavis Rati and Liparit Baghvash of Kldekari. Bagrat was preparing for another campaign against the lords of Kakheti and Hereti when a more serious threat thwarted his plans.

In the early 11th century, the Seljuk tribes began massive migration to the Asia Minor and the Caucasus. After founding the Seljuk Sultanate in 1055, they expanded their sphere of influence to Iran, Iraq and Syria. In 1064, the Seljuk Sultan Alp Arslan led a successful incursion into the southern regions of Georgia and, four years later, he ravaged eastern Georgia, even reaching Imereti in the west. In 1071, the Seljuk victory over the Byzantine army at the crucial battle of Manzikert opened the way for their systematic conquest of the Caucasus. In 1080, the so-called didi turkoba (‘the Great Turkish Troubles’) period began in Georgia when the Turkish tribes arrived in large numbers to settle on Georgian lands and turned the occupied territory into pastures, undermining the local agriculture and economy. King Giorgi II (1072-1089) was forced to recognize their supremacy and paid tribute to the Seljuk sultan.

The Golden Age Of Georgia 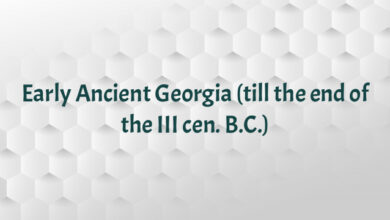 Early Ancient Georgia (till the end of the III cen. B.C.)

Roman Conquest of Iberia and Colchis