When the sun goes down behind the great oaks along the Bayou Teche near Franklin, it throws red needles of light into the dark woods, and leaves a great glow on the still bayou. Ma’am Mouton paused at her gate and cast a contemplative look at the red sky.

Ma’am Mouton’s remark must have been addressed to herself or to the lean dog, for no one else was visible. She moved briskly about the yard, taking things from the line, when Louisette’s voice called cheerily:

Louisette was petite and plump and black-haired. Louisette’s eyes danced, and her lips were red and tempting. Ma’am Mouton’s face relaxed as the small brown hands relieved hers of their burden.

“Sylves’, has he come yet?” asked the red mouth.

Even as she spoke a quick nervous step was heard crunching up the brick walk. Sylves’ paused an instant without the kitchen door, his face turned to the setting sun. He was tall and slim and agile; a true ‘cajan.

Sylves’ frowned, but said nothing. It was a silent supper that followed. Louisette was sad, Ma’am Mouton sighed now and then, Sylves’ was constrained.

Ma’am Mouton dropped her fork and stared at him with unseeing eyes; then, as she comprehended his remark, she put her hand out to him with a pitiful gesture.

“Maman, don’t, don’t!” he said weakly; then gathering strength from the silence, he burst forth:

“Sylves’!” screamed both women at once.

Chicago! That vast, far-off city that seemed in another world. Chicago! A name to conjure with for wickedness.

“W’y, yaas,” continued Sylves’, “lots of boys I know dere. Henri an’ Joseph Lascaud an’ Arthur, dey write me what money dey mek’ in cigar. I can mek’ a livin’ too. I can mek’ fine cigar. See how I do in New Orleans in de winter.”

“Non, non, ma chere,” he answered tenderly. “I will come back when the bayou overflows again, an’ maman an’ Louisette will have fine present.”

Ma’am Mouton had bowed her head on her hands, and was rocking to and fro in an agony of dry-eyed misery.

But Ma’am Mouton was inconsolable.

It was even as Sylves’ had said. In the summer-time the boys of the Bayou Teche would work in the field or in the town of Franklin, hack-driving and doing odd jobs. When winter came, there was a general exodus to New Orleans, a hundred miles away, where work was to be had as cigar-makers. There is money, plenty of it, in cigar-making, if one can get in the right place. Of late, however, there had been a general slackness of the trade. Last winter oftentimes Sylves’ had walked the streets out of work. Many were the Creole boys who had gone to Chicago to earn a living, for the cigar-making trade flourishes there wonderfully. Friends of Sylves’ had gone, and written home glowing accounts of the money to be had almost for the asking. When one’s blood leaps for new scenes, new adventures, and one needs money, what is the use of frittering away time alternately between the Bayou Teche and New Orleans? Sylves’ had brooded all summer, and now that September had come, he was determined to go.

Louisette, the orphan, the girl-lover, whom everyone in Franklin knew would some day be Ma’am Mouton’s daughter-in-law, wept and pleaded in vain. Sylves’ kissed her quivering lips.

“Ma chere,” he would say, “t’ink, I will bring you one fine diamon’ ring, nex’ spring, when de bayou overflows again.”

Louisette would fain be content with this promise. As for Ma’am Mouton, she seemed to have grown ages older. Her Sylves’ was going from her; Sylves’, whose trips to New Orleans had been a yearly source of heart-break, was going far away for months to that mistily wicked city, a thousand miles away.

October came, and Sylves’ had gone. Ma’am Mouton had kept up bravely until the last, when with one final cry she extended her arms to the pitiless train bearing him northward. Then she and Louisette went home drearily, the one leaning upon the other.

Ah, that was a great day when the first letter came from Chicago!

Louisette came running in breathlessly from the post-office, and together they read it again and again. Chicago was such a wonderful city, said Sylves’. Why, it was always like New Orleans at Mardi Gras with the people. He had seen Joseph Lascaud, and he had a place to work promised him. He was well, but he wanted, oh, so much, to see maman and Louisette. But then, he could wait.

Was ever such a wonderful letter? Louisette sat for an hour afterwards building gorgeous air-castles, while Ma’am Mouton fingered the paper and murmured prayers to the Virgin for Sylves’. When the bayou overflowed again? That would be in April. Then Louisette caught herself looking critically at her slender brown fingers, and blushed furiously, though Ma’am Mouton could not see her in the gathering twilight.

Next week there was another letter, even more wonderful than the first. Sylves’ had found work. He was making cigars, and was earning two dollars a day. Such wages! Ma’am Mouton and Louisette began to plan pretty things for the brown cottage on the Teche.

That was a pleasant winter, after all. True, there was no Sylves’, but then he was always in New Orleans for a few months any way. There were his letters, full of wondrous tales of the great queer city, where cars went by ropes underground, and where there was no Mardi Gras and the people did not mind Lent. Now and then there would be a present, a keepsake for Louisette, and some money for maman. They would plan improvements for the cottage, and Louisette began to do sewing and dainty crochet, which she would hide with a blush if anyone hinted at a trousseau.

It was March now, and Spring-time. The bayou began to sweep down between its banks less sluggishly than before; it was rising, and soon would spread over its tiny levees. The doors could be left open now, though the trees were not yet green; but then down here the trees do not swell and bud slowly and tease you for weeks with promises of greenness. Dear no, they simply look mysterious, and their twigs shake against each other and tell secrets of the leaves that will soon be born. Then one morning you awake, and lo, it is a green world! The boughs have suddenly clothed themselves all in a wondrous garment, and you feel the blood run riot in your veins out of pure sympathy.

One day in March, it was warm and sweet. Underfoot were violets, and wee white star flowers peering through the baby-grass. The sky was blue, with flecks of white clouds reflecting themselves in the brown bayou. Louisette tripped up the red brick walk with the Chicago letter in her hand, and paused a minute at the door to look upon the leaping waters, her eyes dancing.

“I know the bayou must be ready to overflow,” went the letter in the carefully phrased French that the brothers taught at the parochial school, “and I am glad, for I want to see the dear maman and my Louisette. I am not so well, and Monsieur le docteur says it is well for me to go to the South again.”

Monsieur le docteur! Sylves’ not well! The thought struck a chill to the hearts of Ma’am Mouton and Louisette, but not for long. Of course, Sylves’ was not well, he needed some of maman’s tisanes. Then he was homesick; it was to be expected.

At last the great day came, Sylves’ would be home. The brown waters of the bayou had spread until they were seemingly trying to rival the Mississippi in width. The little house was scrubbed and cleaned until it shone again. Louisette had looked her dainty little dress over and over to be sure that there was not a flaw to be found wherein Sylves’ could compare her unfavourably to the stylish Chicago girls.

The train rumbled in on the platform, and two pair of eyes opened wide for the first glimpse of Sylves’. The porter, all officiousness and brass buttons, bustled up to Ma’am Mouton.

“This is Mrs. Mouton?” he inquired deferentially.

Ma’am Mouton nodded, her heart sinking. “Where is Sylves’?”

There appeared Joseph Lascaud, then some men bearing Something. Louisette put her hands up to her eyes to hide the sight, but Ma’am Mouton was rigid.

“It was too cold for him,” Joseph was saying to almost deaf ears, “and he took the consumption. He thought he could get well when he come home. He talk all the way down about the bayou, and about you and Louisette. Just three hours ago he had a bad hemorrhage, and he died from weakness. Just three hours ago. He said he wanted to get home and give Louisette her diamond ring, when the bayou overflowed.” 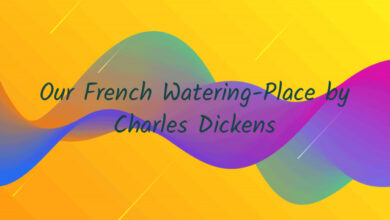 Our French Watering-Place by Charles Dickens 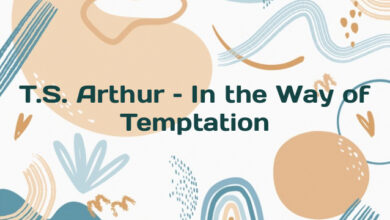 T.S. Arthur – In the Way of Temptation 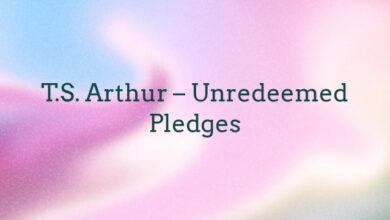 The Secret of Goresthorpe Grange by Sir Arthur Conan Doyle