When I do count the clock that tells the time,
And see the brave day sunk in hideous night;
When I behold the violet past prime,
And sable curls, all silvered o’er with white;
When lofty trees I see barren of leaves,
Which erst from heat did canopy the herd,
And summer’s green all girded up in sheaves,
Borne on the bier with white and bristly beard,
Then of thy beauty do I question make,
That thou among the wastes of time must go,
Since sweets and beauties do themselves forsake
And die as fast as they see others grow;
And nothing ‘gainst Time’s scythe can make defence
Save breed, to brave him when he takes thee hence.

This sonnet is so famous that it almost makes comment superfluous. It will always be one of the finest sonnets in the history of language. The slow and swift passage of time which brings all things to an end is described, not indeed copiously, but with such significant and devastating effect that mortality almost stares us in the face as we read it. The way in which the sense of the lines ends with the line itself is like the ticking of a clock or the inexorable motion of a pendulum as it beats from side to side. The significance of the placing of this sonnet here (12) (twelve hours of the day) as well as that of the ‘minute’ sonnet at 60 is difficult to determine, but at the very least it points to an ordering hand, which, like the clock itself, metes out the sequence of relevant events as they occur. (See JK, P.Classics Intro. p42.)

The overall effect is sombre, and the concluding couplet, with its brave stand against time, confined to a single line in the poem, gives the impression that nothing will be saved, and that the reality of what the poet has been urging all along is as slight as breath and water.

1. When I do count the clock that tells the time,count = record, sum up;
tells = gives an account of, speaks (by chiming). In days when light was scarce, the audible telling of time was important, hence the use of repeater clocks which, when a button was pressed, or a string pulled, chimed out the hour most recently passed. Village and town clocks also chimed on the hour.2. And see the brave day sunk in hideous night;brave: here the word has almost a visual significance, suggesting brightness and gallantry, as opposed to the ugliness and darkness of hideous night. Compare Miranda’s exclamation in The Tempest:
Oh brave new world,
That has such people in’t! Tem.V.1.183-4,
and Henry King:
Brave flowers, that I could gallant it like you
And be as little vain! (c. 1650).3. When I behold the violet past prime,The violet is emblematic of the Spring and new growth.
prime = the period of perfection, the springtime best. Hence past prime is past their best, fading, dying.4. And sable curls, all silvered o’er with white;

sable = black; a term from heraldry.
all silvered o’er with white = having turned silvery due to the whiteness of age. The description is of the black or dark hair of a youth turning white as he becomes an old man. See for example the celebrated passage in As You Like It, All the world’s a stage, etc. AYL.II.7.139-166. Also Horace Odes I.9:
…..nec dulces amores
Sperne puer, neque tu choreas
Donec virenti canities abest
Morosa.

So do not spurn love, or the dance, while youth yet reigns, and from your lusty head the white hairs are still absent.
See the note to line 12 below.

Q reads ‘or siluer’d ore’ and suggested emendations are discussed in numerous editions. I have used the most commonly accepted emendation.5. When lofty trees I see barren of leaves,The leafless trees are described as barren, suggesting waste and futility, and the destructive processes of age and decay through time. Cf Sonnet 73.6. Which erst from heat did canopy the herd,erst = formerly, erstwhile;
canopy = to cover as with a canopy, to shade. Cattle and sheep stand under trees in times of heat.7. And summer’s green all girded up in sheaves,summer’s green This refers to the wheat or barley growing in the fields;
girded up in sheaves = bound together with string round the middle to make a sheaf or bundle. Before the days of combine harvesters wheat was cut by hand, then bound into sheaves which were carried to the threshing barn on a cart or ‘bier’ . (See illustration below).8. Borne on the bier with white and bristly beard,

Borne on the bier = carried away on the wagon or cart. A bier was also used for carrying the coffin at a funeral. Nowadays it has almost exclusively that meaning. Q’s beare is an old spelling of bier.
with white and bristly beard – the awn of the wheat formed a sort of beard, a whiskery growth around the grain. 9. Then of thy beauty do I question make,

Then I begin to contemplate what might happen to your beauty. Then I begin to question the permanence (and reality) of your beauty.10. That thou among the wastes of time must go,That you also will decline and decay like all things.
the wastes of time is suggestive not only of the destruction caused by time, but of deserts, where no life exists, as though beauty were condemned ultimately to wander in desolate spaces.11. Since sweets and beauties do themselves forsakesweets and beauties – abstract for concrete – sweet things and beautiful things.
do themselves forsake = abandon themselves (to oblivion). Probably a Latinism. Ingram and Redpath, Shakespeare’s Sonnets, 1964,78, give sese deserere as the original Latin idiom, to abandon oneself, to give up hope.12. And die as fast as they see others grow;

as fast as they see others grow = as one thing dies, another thing grows to replace it. There is continuous mutation. Although Ovid’s Metamorphoses in Golding’s translation is often quoted as an abiding influence in this sonnet, there is much here that is purely Horatian. See for example Horace’s Ode 5 of Bk.II:
…………Currit enim ferox
Aetas, et illi, quos tibi dempserit
Apponet annos.

Swiftly the seasons sweep past, and the years which are taken from you, are given to her.
The passage of the seasons, winter changing to spring, autumn yielding to winter, is also very much a Horatian theme, and probably Horace’s odes would have been known to Shakespeare from his schooldays.

(Quintus Horatius Flaccus. A Roman poet, c 65-8 BC.)13.   And nothing ‘gainst Time’s scythe can make defence

Time and Death were often depicted (in churches, books, broadsheets etc.) as carrying a scythe with which to mow down whatever they chose. The scythe is not a tool which is commonly seen nowadays. It had a long curving blade and a handle set perpendicularly to the blade, which was held by the scyther using both hands. As it swept over the grass or crop it cut a large semicircle or swathe around the scyther, who then advanced a few footsteps for the next cut. There is an excellent description of a field of hay being mown by this method in Tolstoy’s Anna Karenina, Part III Chs. 4,5. Wheat seems generally to have been cut using a sickle, a much smaller tool than the scythe. The hay cannot defend itself against the sweep of the scythe’s blade.

Opposite: A depiction of death wielding a scythe, from the back of an old playing card. Probably 16th Century.14.   Save breed, to brave him when he takes thee hence.Save breed = except having children. Breed here means the begetting of children and the children themselves. brave in this contextsuggests defiance of Time’s brutality, as well as the brightness of a show, and it echoes the same word from 2 above. (See the note). 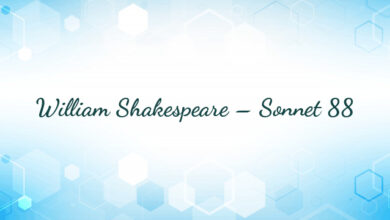